By many accounts, the State of the Drug Testing Industry is very good.  The Drug & Alcohol Testing Industry Association (DATIA) recently held its’ National Conference in Las Vegas, Nevada and with over 834 attendees, 80 exhibit booths and expert presenters; it was a great conference.  I personally spoke to over 100 attendees and every single one said business is good, healthy, and growing. More than a few stated “Business is Booming” and several more stated that “a lot depends on the continuing improvement of the economy and growing employment figures in the United States.”

One thing is certain and that is the fact that drug use and abuse is not declining. The most recent statistics from Substance Abuse and Mental Health Services Administration (SAMHSA) annual household survey revealed:

According to a new market report published by Transparency Market Research, “Drugs of Abuse Testing Market (Sample Based Testing – Urine, Saliva and Hair Onsite and laboratory Testing) – Global Industry Analysis, Size, Share, Growth, Trends and Forecast, 2013 – 2018,” the global drugs of abuse testing market was valued at USD 2.6 billion in 2012 and is expected to grow to reach an estimated value of USD 3.4 billion in 2018.  The reported stated “This rise in the consumption of illicit drugs has led to the demand for drugs of abuse testing. Testing of drugs of abuse can be done at home, educational institutions, or workplace, or at the laboratory using many superior techniques to achieve accurate results.”  The market research report also stated that urine is the largest specimen sample segment and it is projected to continue to grow.

Mergers and acquisitions continue to be the norm in our industry. In 2012, LabCorp completed the acquisition of MEDTOX Scientific, Inc.  Also, in 2012, eScreen merged with Pembrooke Occupational Health and soon afterward eScreen was purchased by Alere.  In 2014, Bode Technology Group, Inc. and its division Chromosomal Labs (DNA identification testing), became a wholly owned subsidiary of LabCorp. DISA Global Solutions has acquired University Services an MRO service formally run Dr. Benjamin Gerson. In February of this year; Abbott Laboratories agreed to buy Alere for $5.8 billion.  On the TPA side, WorkforceQA out of Salt Lake City, Utah has made several acquisitions and mergers over the last few years including Employers Drug Program Management (EDPM), Interactive Medical Connections (IMC), Compliance Safety Systems (CSS) and Intermountain MRO Services (IMRO).

As the saying in the Loretta Lynn song goes “We’ve Come a Long Way Baby.”  Early on, urine drug testing at laboratories was the dominant specimen type and testing methodology.  Today there are many testing types and methodologies.  While urine testing at a laboratory is still by far the most recognized type of testing, instant testing with urine or oral fluid, hair follicle testing, and oral fluid testing at a laboratory are now common methods used in workplace drug testing.

Instant drug testing devices are currently used by employers at their places of business throughout the United States; they are also used at many collection sites including LabCorp and Quest Diagnostics Patient Service Centers (PSC’s).  Often referred to as rapid testing or point of collection testing (POCT), this testing methodology can reveal negative drug test results in just about five minutes which enables employers to get applicants on the job and existing employees back to work more quickly.  Specimens producing non negative results should be sent to a laboratory for confirmation testing and then review and verified by a certified medical review officer; failure to do this may place the employer at risk for potential legal action if they have taken adverse action on an applicant or employee based on the instant non-negative result alone.  Both drug testing collection sites and employers should use caution when choosing which instant testing devices they utilize; it is very important that they are approved by the U.S. Food and Drug Administration (FDA) for workplace testing. The FDA clearance process includes a detail of the appropriate procedures for the use of instant testing devices including the requirement of sending non-negative initial screens to the laboratory for confirmatory testing.

Hair follicle testing is becoming increasingly more popular.  In fact, several large trucking companies are now performing hair follicle testing as an addition to the DOT required 5 panel urine lab based testing.  Other industries that have embraced hair testing include the oil and gas industry, the gaming industry and auto manufacturing industries.  Hair testing has approximately a 90 day look back period and it is difficult to cheat on a hair test.  Laboratories have increased the menu of panels available for hair testing beyond the typical 5 panel hair test that was previously available for hair.  Expanded opiate testing is now available for hair and some laboratories are offering hair testing for additional drugs panels as well such as: Benzodiazepines, Barbiturates, Methadone, Propoxyphene, Meperidine, Tramadol, Fentanyl and others.

In the near future, hair follicle testing may be allowed in the DOT mandated drug and alcohol testing program.  In December of 2015, Congress passed legislation known as ‘‘Fixing America’s Surface Transportation Act’’ or the ‘‘FAST Act.’’  With this legislation, hair testing has been authorized in conducting DOT pre-employment testing for use of a controlled substance and DOT random testing for the use of a controlled substance if the operator was subject to hair testing for pre-employment testing.  It is important to note that this is an initial authorization for hair testing but regulations and guidelines still need to be established by the Department of Health and Human Services (HHS). The Law requires HHS to issue guidelines no later than 1 year from date of enactment. It will be interesting to see if hair follicle testing becomes a reality for the DOT program as early as January of 2017.

Laboratory based oral fluid testing seems to be gaining the most momentum in our industry.  It seems that every month there is an industry webinar being promoted to educate employers and drug testing industry professionals about Lab based oral fluid drug testing.  This testing is currently offered by most of the major laboratories providing workplace drug testing including Quest Diagnostics, Labcorp, Alere Toxicology and Clinical References Laboratories.  Similar to hair testing it is very difficult to cheat on oral fluid drug testing.  It is important to note that the look back period is the shortest of all the specimen types and also that many drugs can be detected within hours of use.

In May of 2015, the U.S. Department of Health and Human Services (“DHHS”) proposed new guidelines in the Federal Register that would revise the Mandatory Guidelines for Federal Workplace Drug Testing Programs to permit the testing of oral fluid specimens for drugs.  Soon after this proposal was opened for comment, 120 comments were received from industry professionals and employers.  Charles LoDico from DHHS spoke at the recent DATIA conference and updated the attendees on the next steps DHHS must take to finalize the proposed rule on allowing oral fluid testing.  Once that is complete and the rule has final approval, DOT will then start their process on incorporating oral fluid testing into 49 CFR Part 40.

It is important to recognize that the above referenced DHHS proposal in May of 2015 also included proposed changes in its mandatory guidelines for urine testing. The proposed changes would allow federal executive branch agencies to test for additional Schedule II prescription medications (oxycodone, oxymorphone, hydrocodone, and hydromorphone). The rule is also going through the DHHS process for final approval. Testing for the expanded opiates is particularly important in light of America’s growing opioid addiction epidemic.  It is good to see that President Obama has made a priority of addressing the startling rise in use of opioids, particularly prescription painkillers like OxyContin, which often lead to use of harder, illegal versions, such as heroin. President Obama also participated in the National Rx Drug Abuse and Heroin Summit in Atlanta, Ga. held on March 29, 2016.

Not only is the industry and the DOT moving to test additional drugs and use alternative specimen types, it is also moving from paper to Electronic (eCCF). So where do we stand on eCCF for DOT? Labs are currently being reviewed for approval to begin using electronic CCF (eCCF) for DOT urine drug testing.  Once approved, the labs will have to coordinate with the National Laboratory Certification Program (NLCP) to complete inspections of their laboratories in order to begin using electronic CCFs for DOT-regulated testing. As the laboratories receive their approvals, they will enable their electronic program CCF for customers to begin utilizing them.  Alere Toxicology’s lab in Gretna, Louisiana has final approval for DOT eCCF.  Others labs as of May 1, 2016 are in the process of undergoing the required inspections for getting final approval.  It is anticipated that by the end of the year, there will be four to five SAMHSA certified labs offering electronic custody and control (eCCF) forms for DOT drug testing.

So how is the State of the Industry? My assessment is that it is very good and that there are many changes and challenges to come.  Legalization of marijuana and possibly other drugs is an issue that needs to be monitored and as an industry along with each industry member we must be proactive.  Look to DATIA for information and resources to help you work with the industry to address this challenge.  Look also to DATIA to learn about final approvals for Labs for electronic custody and control forms, oral fluid testing final approval for DOT testing, expanded opiates final approval for DOT testing, hair testing for DOT covered employees and of course other changes and updates for our industry.

I wrote an article in early 2008 for the inaugural issue of the DATIA focus magazine entitled “What a Great Time to be in the Drug Testing Industry!”  The economy was starting to struggle but the drug testing business was still strong.  Little did I know that we would be in for some tough times with the financial crisis that peaked later that year.  The number of workplace specimens going to the labs for testing decreased for the first time ever.  The good news is that today the industry is again booming and both DOT and Non DOT testing continue to be increasing.  Actually it is it Non DOT testing that is fueling the growth of the drug testing industry.  In contrast to the early years of drug testing, the growth segment of the industry is the small and medium size non-regulated employer.  I am excited about the future of the drug testing industry.  Business is up. Mergers and acquisition are seeing increased activity; background screening is also growing in leaps and bounds plus alternative specimen testing continues to grow.  If you are a Service Agent and are not seeing an increase in the market for non-DOT drug screening, it is time to review your marketing programs because our industry continues to grow and so should you. I am happy to say, once again, “What a Great Time to be in the Drug Testing Industry!”

References:
Results from the 2014 National Survey on Drug Use and Health – http://www.samhsa.gov/data/sites/default/files/NSDUH-FRR1-2014/NSDUH-FRR1-2014.pdf

Joe Reilly entered the world of drug testing in 1993, he is well known throughout the industry and considered an expert on workplace drug testing issues. Joe served for nine years on the DATIA Board of Directors and served as Chairman of the Board from 2004–2008. After a few years of retirement, Joe is again serving again on the DATIA Board and works with the leadership of several drug testing companies including National Drug Screening, Joe Reilly & Associates and USA Mobile Drug Testing. 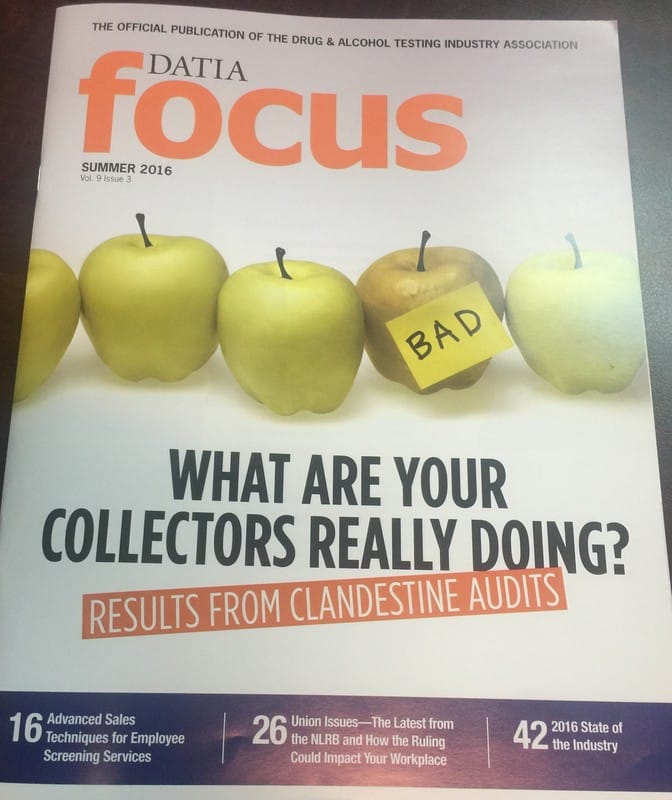